Like in Windows 7, you can also add the God Mode Shortcuts to your desktop in windows 8. God Mode gives you more than 230 shortcuts, all the control panel and setting items that you have on your computer.

Follow the steps below to add God Mode to your computer.

1. Create a new folder anywhere on your desktop. Right click on your Desktop and create new folder.

2.Once created, rename the folder from ‘New Folder’ to this exact code, Including the words GodMode at the front.

Once you have copied the text above press the enter key.

The folder icon will change to the Control Panel Icon.

Open up the shortcut to reveal over 230 items to chose from, all of which can be found in various ways from searching on the Start Menu or within the Control Panel itself. 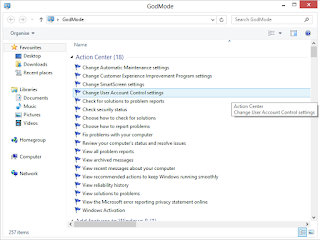 So today is the day that Windows 8 is released, but the big question is will you be buying it ? 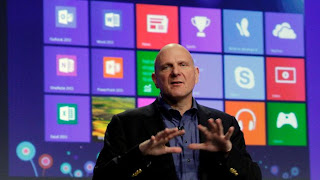 The Microsoft CEO Steve Ballmer called the introduction of Windows 8 a "bold, innovative" move that had been tested for more than 1.24 billion hours worldwide.

"No product anywhere receives this kind of testing anywhere in the world," Mr Ballmer told a New York audience.

But this new flavour of Windows has changed its appearance dramatically with the ditched start button and new full screen start screen. This screen now contains all the well known apps and extra ones that you can get from Windows Store.

Microsoft Windows business leader Tina Flammer said users would need to adapt to the new software menus, but it had been designed for an easy transition.

"Windows 8 was designed to be intuitive," she said.


"We know that without the traditional (start button) it is different. Every time we bring out a device the familiarity is different."

Microsoft faced further scrutiny at its Australian launch for differences around the software's pricing and packages.

This version is going to be very important for Microsoft's Future in the Software business if this flops could it be the end for Windows, who knows i think not but it could severely impact them in future releases.

Earlier this week i Blogged about how to add the missing start button back this can be found here.