New super cheap E-Reader coming out soon There have been some cheap e-readers released in the past, there is a new competitor in the market called the Txtr Beagle, the beagle will surely back the main competitors into a corner being so cheap at €10 or about $13 when it comes out. 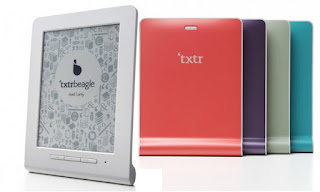 Obviously, for such a low price, you're not going to get lots of featuers. There's no touchscreen, no backlight, no 3G -- not even WiFi is baked into the impossibly 5mm thin device. The screen is only five inches but,  its claiming to offer a more enjoyable experience than reading an iPad or talking to your significant other. What is inside this barebones device is 4GB of storage and a Bluetooth radio which, when paired with your phone, can transfer ebooks from your mobile to the Beagle using the free Txtr app (available for Android 4.0 with an iOS version is in the works).

Instead of an expensive rechargable cell, power is provided by a trio of AAA batteries, which the company claims will last you up to a year of regular reading. Almost as interesting as the device itself, is the model being used to keep the costs down. Txtr is positioning it not as a standalone e-reader, but as a smartphone accessory it hopes that carriers will offer with a small subsidy. The company's chief commercial officer Thomas Leliveld has said that work is underway to get AT&T and Sprint on board, but that talks are still ongoing with providers.

So keep your eyes peeled for this gadget it wont be to far away.